Chloe’s father was at his wit’s end with the behavior of his brilliant but poorly behaved daughter. In desperation, he called a nanny agency recommended by a friend whose daughter suffered from behavioral issues. When Bianca Rose made her appearance, the father was taken aback as she was but a few years older than his daughter. He was assured that Bianca was a highly trained professional who knows how to deal with a poorly controlled young adult.

Upon meeting her new nanny, Chloe assumed that she was but another in a long line of servants and wanted her nanny to drive her to a friend’s house as her daddy had taken her car keys away. Bianca made it clear that the brat was going nowhere until her chores were done. When she got nothing but lip from the spoiled rich girl, Bianca pulled out her nanny paddle and began to methodically punish her charge. In a perfectly organized way, Chloe’s spanking started over her shorts then proceeded to her boy-shorts and then her bare bottom.

Chloe begged and pleaded for her punishment to stop but this would not happen until she had learned her lesson. As the leather paddle landed time and again upon her bare bottom, Chloe was quickly learning that her nanny was no Mary Poppins, as instead of a spoon full of sugar, Bianca offered but the bitter pill of discipline. Once her punishment was over, the tearful brat was made to stand in the corner to contemplate the consequences that resulted from her poor behavior. 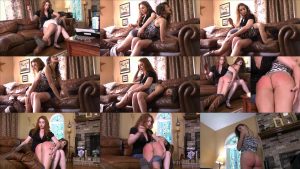