When their mom (played by Lorelei Mission) overhears her two daughters (Chrissy Marie and Cora Ora) plotting to become callgirls, she puts a stop to it by putting them over her knee for a hard spanking. Since Chrissy is the instigator, she gets it worse, with a wooden hairbrush. Starring: Lorelei Mission, Chrissy Marie, Cora Ora. 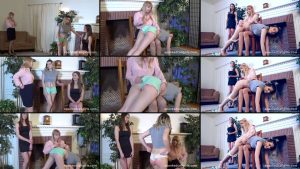