Piper does not make a good impression on her new coach when she shows up extremely late to practice and presents with a haughty attitude. Veronica makes an impression of her own when she takes the girl over her lap for a bare bottomed spanking.

Piper is disqualified and not allowed to continue participating in the tennis match after she gives the finger to the umpire. The fiery red head’s poor judgement continues in the locker room when she flips off Veronica too! Veronicaв’s response is even stronger than the umpire’s as she applies a wooden hairbrush to the bratty girl’s backside.

After having her poor bottom spanked fire engine red, Piper promises that there will be no more arguing with the ref’s calls.Piper is undressing and about to head to the showers when Coach Veronica stops her in her tracks.

Coach is not at all pleased with the girl’s complete lack of effort on the courts and bends her over for a strapping with the belt before allowing her to continue on to the showers. Piper has a whole new attitude after being strapped and will never throw another match again. 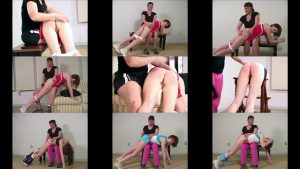