Stacey and Leandra are lovers. Their boss sent them to the Birchrod Inn because they could not keep their hands of each other during workhours. After the warning lecture and they had changed into their maid’s uniforms, they were ordered to dust but very soon they were involved in some hanky panky. Stacey was sexily spanking Leandra on the couch when they were caught. Mr. Johnson turned both girls across His knee and spanked them soundly. He then sent them upstairs to clean the bedrooms but they were caught again soothing and fondling Leandra’s bottom They were dragged downstairs and their bottoms got a sound leather paddling over the table and they were forced to stand against the wall, sore red bottoms on display, untill all the guests had checked in. 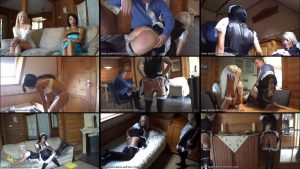