Meet Red Little who makes her first appearance on our website. You will want to see more of this young lady. Red is the new sister of Zoe, thanks to her mother marrying Zoe’s 3 times divorced father. Red has made every effort to get along with her new sibling but Zoe hates any attention that her doting daddy might give to his new family. What’s worse for Zoe is that Red is living in Zoe’s home. and she makes this quite clear with a confrontational meeting telling her that it is her place so Red must live with Zoe’s “My House My Rules” mantra. She threatens Red with all sorts of accidents around the house that she will be blamed for, making the new sister very unpopular unless she does exactly as she says. Zoe gives Red an example of how things will be from now on with a humiliating scolding before she spanks her new step-sibling. Red is in shock but doesn’t want to appear bad in light of Zoe’s blackmailing threats to her new father. so she does what Zoe says. This leads to a very embarrassing bare bottom spanking that gets Red’s bottom living up to her name. It is followed by further humiliation as Zoe uses the hairbrush on Red’s very sore backside as she continues to mock and ridicule the poor hapless girl! One wonders if the previous divorces were due, in part, to Zoe’s appalling behavior making it uncomfortable for her previous new families. Red knows that she will need to steer clear of this mad psycho in the future. It’s going to be hard living under the same roof. happy families, eh? 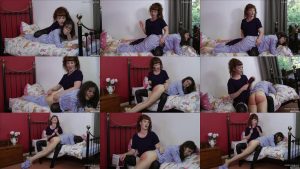