Part 13: The day after Officer Pearson was soundly strapped and paddled for not disciplining her cadets, and was ordered to spank ALL her cadets soundly, the colonel went to inspect her cadet’s bottoms and found a few slightly pink so Pearson was called into his office. After a severe scolding she was given a proper hard military bare bottom spanking and she got a long severe bare bottom caning which made her regret her soft attitude towards her cadets.

Part 14: Cadets Milena and Scarlett after good conduct, were awarded a weekend pass. Dressed in their smart formal uniforms they were warned by their commander officer to be on their best behaviour that weekend. Both of them ended up in The Lion’s Head a local pub and they got drunk and behaved very badly. Of course it was reported to the Academy and both cadets were back in front of their commanding officer on Monday morning. They were both severely scolded and they got a long hard spanking. And for two months extra duties. 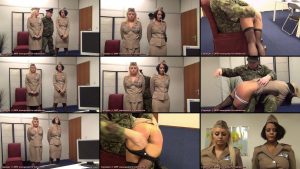