This is the first of our very special feature length multi-girl movies. It is an extravaganza of non stop action of beautiful cheergirls bickering, bratting and receiving bare bottom spankings & hard wooden paddlings. The coaches of the opposing teams apologize to each other over the televised incidents that shamed both squads with the girls openly fighting in the National Championships. They decide the only way to deal with this rivalry of the main instigators is to deal with it in one of two ways: The first option is to remove them from their teams and some will lose their valuable scholarships. The second option is that they all receive the spankings they deserve in front of each other. The girls are far from happy but realize how serious this is and start to take the humiliating spankings in front of their fellow squad members and also with the rivals watching some of them feel real shame. They are all spanked first, over their panties and then without which some girls found embarrassing. This punishment is far from over as the girls all get a whacking from each coach’s “Bad Cheerleader” paddle. This is a fantastic chance to see 9 girls and 2 cheer coaches in Season 1 of the 40 minute epic of our new “Cheer Squad Discipline” series! This features many well known fetish stars and some new girls you might not have seen before. For lovers of this style of discipline this is a “must see” to add to your growing collection of authentic cheerleader spanking erotica. 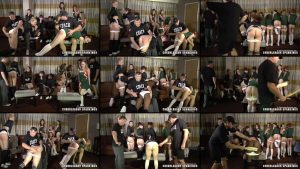 It does not work out for the girls to slip out - RealSpankings – Sneaking Out During Quarantine (par...
Spanking girl is spanked by the Warden - Spanking M/F – Strapped In The Woods
Extreme paddling by RealSpankings – Cara’s Strict School Paddling
Rae and Maya Spanked by The Dean (Part 1 of 4) - RealSpankingsInstitute
Harlan is naked, bruised and sore after spanking girl - Harlan’s Otk And Strapping By Miss Betty (p...
TAGGED be punished, be spanked, punishment, spanked, Spanking M/F