Part 9: Julie is one of the new waitresses at Mike’s 50’s Diner and after her first week, she nervously had to report to Chef after service for her first evaluation. It turned out very painfull for her bottom as she got a sound OTK spanking for being late a few times, a sound OTK carpet beating for smoking outside her breaks and a hard bare bottom birching for wearing a string instead of the white Fifties panties..

Part 10: Cheyenne applied for a job as a waitress at Mike’s 50’s Diner and during the interview she told Mike that she was a profesional Dominatrix and that she needed the extra money. She was hired and a few days later, after service, when Chef Mike walked into the diner, he heard the sounds of a lad being whipped coming from the kitchen. He stormed in, booted the lad out of his kitchen and threw Cheyenne over his knee for a sound spanking. He then picked up her whip and riding crop she was using, and thrashed her own bare bottom soundly with them! 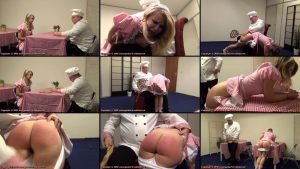