Jolene had just returned from her internship at a local car company and her report stated that she made a lot of spelling mistakes in her correspondance and she had broken a very expensive printer. For the spelling she was tested by Mr. Johnson in his special way. She had to stand next to him and they both read her document and for every mistake her bottom was smacked! Luckily the director of the car company agreed that for the printer she broke, she didn’t have to pay anything but Mr. Johnson had to give her a sound spanking which he did. 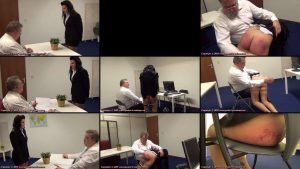