One of the oldest traditions at the Southport Naval Academy is when a cadet brings a boy in to the Academy grounds, she gets a special punishment that has been handed out for hundreds of years. She has to strip and only leave her hat, shoes and socks on and she is given a sound spanking and birching in the diaper position by her commanding officer and then she has to stand in the parade ground for 2 hours so all the cadets will know what she has done. Cadet Danielle was caught with a boy behind the sheds and she was soon ordered to strip…. 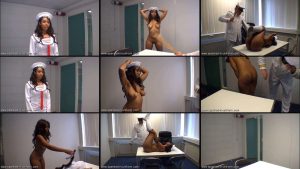