Nuna Starks and Mackenzie Reed will be punished.
The girls are nervous, and are fully aware of how much trouble they are in but didn’t expect such a harsh and humiliating session as this one!
Nuna Starks and Mackenzie Reed have been told to report to the school’s punishment room where they will be disciplined after school. This is no ordinary detention, as these girls are a whisker away from being expelled, this is their final punishment and it will count! Kenzie is taken over Sir’s lap and given a spanking on her crisp white panties, whilst Nuna is told to watch. The girls swap and it is Nuna’s turn. the tension builds as Kenzie goes over his lap for a panties down, bare bottom spanking. This is repeated for Nuna, who kicks and squeals as the spanking starts to really hurt.

Then they are told in turn to take turns at kneeling on the bench as the other girl watches the Reformatory Leather Strapping of the other. It is hard and mean, and poor Kenzie quickly loses count in between the floods of tears. Nuna can see the spanking girl of her fellow conspirator and learns to concentrate on keeping count of 12 hard swats of leather. The final installment is unexpected as the girls are given a blistering caning, but they have to hold each other’s hands and look into the eyes of the other across a table. This is deeply personal and so humiliating that it brings yet more tears to both girls! It is a tearful detention punishment that these young ladies will not forget, which is the whole point as this is their final chance to remain in school! So it is hoped that this will remind the girls just how serious it really is! 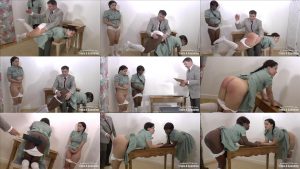