The headmaster called schoolgirls Chervana and Angel to the punishment room for a knicker inspection. Their knickers were correct and clean but the little madams were wearing earrings and a nose ring which are against school regulations. They were both taken over the knee and soundly spanked. A few days later both decided to have a small tattoo placed on their ankles but Miss Rogers the PT teacher saw that, and informed the headmaster. Both girls were called to the punishment room again and they both got a sound strapping and caning followed by spending recess in the corner, sore red bottoms bare. 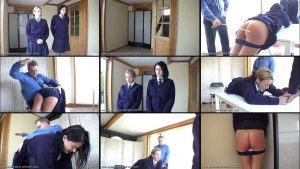