Audrey arrived at the Mr. Pierson’s studio at 4.30 pm when the call time was 9.30 am. Audrey was jokingly known as the late Audrey for her propensity to arrive late for her shoots. Mr. Pierson was aware of her poor behavior and discussed his concerns with Audrey despite her managements assurance that the bratty model had learned her lesson.

She promised to be on time but felt that a 9.30 am call time to be an act of barbarism . Audrey arrived at Mr. Pierson’s studio at 4.30 pm to find the studio barren of crew with only an agitated David Pierson present. David had great affection for the amazing model known as Audrey but knew that this behavior could not be condoned by him.

When Audrey arrived with a bad attitude to cover up for the fact the she was unconscionably late Mr.Pierson knew that this brat needed some strong discipline. With the threat of another call to her management coming from this major producer Audrey agreed to be spanked. She was stunned as her jeans and panties were lowered but was even more disconcerted by the ferocity of the spanking being applied to her bare bottom by her irate producer. 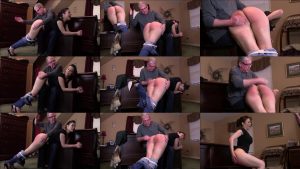