Casey had been sent to bed early but this didn’t stop her from using various social media sites to stay connected with her friends and it also meant she wasn’t sleeping. John took his duties of looking after her seriously but she had become difficult recently and he was reluctant to punish her the old fashioned way but no amount of reasoning or making her feel like an equal did the trick so he had resorted to various spanking and humiliation punishments which seemed to work. This time she was caught blocking him on various social media sites that he had insisted on being able to monitor and he knew she was up to no good and his suspicions were correct. He was very disappointed and after a brief verbal chastisement told her to get over his knee like she had before and receive a spanking. However, as she had continued to defy him, this time it was also going to be on her bare bottom to which she protested about! He was having none of it and proceeded to spank her OTK and then in a most humiliating and embarrassing position on the bed before he took a few snaps on his own smart phone of her red spanked bottom with the threat the images would end up over various online chastisement sites he knew about if she didn’t behave in future! 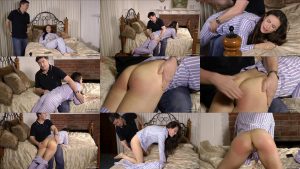